Inicio Facultad de Humanidades The problem with male aggressors is that they are absolutely normal! 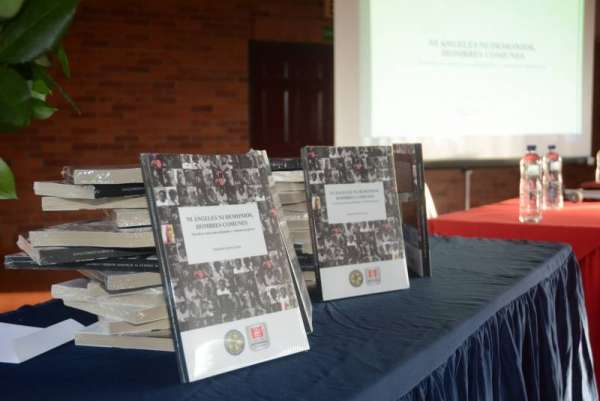 The problem with male aggressors is that they are absolutely normal!

This was the proposal of the sociologist, Doctor of Social Sciences and professor at the Autónoma de Occidente University, Elizabeth Gómez Etayo in her book ‘Neither angels nor demons, ordinary men: Narratives about masculinities and gender-based violence’.

It is a work that helps understand why male aggressors, contrary to what everyone believes, are ordinary people. For the author saying ‘violent man’ generates an imagery of someone rude, strong, muscular, and wild; in short, someone ‘violent’ and not an ‘ordinary man’.

Six men took part in the research of the doctoral thesis of Social Sciences with emphasis on gender studies at the State University of Campinas in Brazil. They physically do not comply with what society sees as a ‘violent man’: some were short, thin and their professions as diverse as their stories, a former policeman, a construction worker and a Doctor in Social Sciences. They were part of the reflection on violent events with their partners, but for the author it was very important to know who they were.

In order to understand this approach, the professor at the Autónoma de Occidente and author of the book ‘Neither angels nor demons, ordinary men’ investigated for five years men who are aggressors and men who consider themselves feminists, and out of the stories reviewed it can be concluded that an aggressor is an ordinary man, a product of a culture that must be transformed.

Researcher Gómez said «people in Colombia say that male chauvinism is cultural, as if they were saying that it is natural but it is exactly the opposite. When something is cultural it means that it was built, that it was educated, that it was raised, that it was created….so it can be transformed. But from repeating it so often, it is thought of as something natural. We have to bet on a new education and a new culture, so that one

day there will be respect between the genders”.

In the chapter ‘Scenes of male violence under the perspective of the aggressors’, the teacher Gómez Etayo shows some violent scenes described by the men interviewed.

One of those stories is that of Juan, a university professor of Plastic Arts, who in his first relationship moved from Cali to another city where he started dating another woman. His partner later moved in with him and when she realized her partner was dating another woman, she got angry and hit him in the waist with a stick. Juan grabbed another stick and hit her too. The next day, when they saw the marks left by the fight on their waists, the couple took it jokingly, saying that they ‘looked like Siamese twins’.

In this way, «we are going to know six narratives of male aggressors who reconstructed their stories and we are going to find six narratives of male feminists who participate in foundations and non-governmental entities for the end of violence against women. The latter say that there has to be education with the aggressors because if we are really interested in transforming gender-based violence from a basic level, it is not going to be solved by punishing them. Obviously we must punish according to the penalty imposed by the justice we have. But everyday life is full of many small forms of violence that are not solved by punishment but by education; by cultural means. The feminists say: ‘let’s work with these aggressors, educate them, re-educate them, talk to them…let them get rid of all that anger, all those fears that are inside and let’s transform that violence against women’ and I agree with that position», concludes sociologist Gómez Etayo.

The book can be purchased from the Publishing Program office at the Valle Lili Campus or from the website www.editorial.uao.edu.co.

Elizabeth Gómez Etayo is a sociologist and holds a Master’s degree in Sociology from Valle University, and a PhD in Social Sciences from the State University of Campinas, Brazil. She is currently a professor and researcher at the Faculty of Humanities of the Autónoma de Occidente University and has dedicated her academic career to the studies of women, youth, gender and culture. She belongs to the research group Conflicts and Organizations, recognized by Colciencias and is also an evaluator peer for this entity. She is the author of several articles in academic journals, opinion columns for regional newspapers and lectures at national and international events.